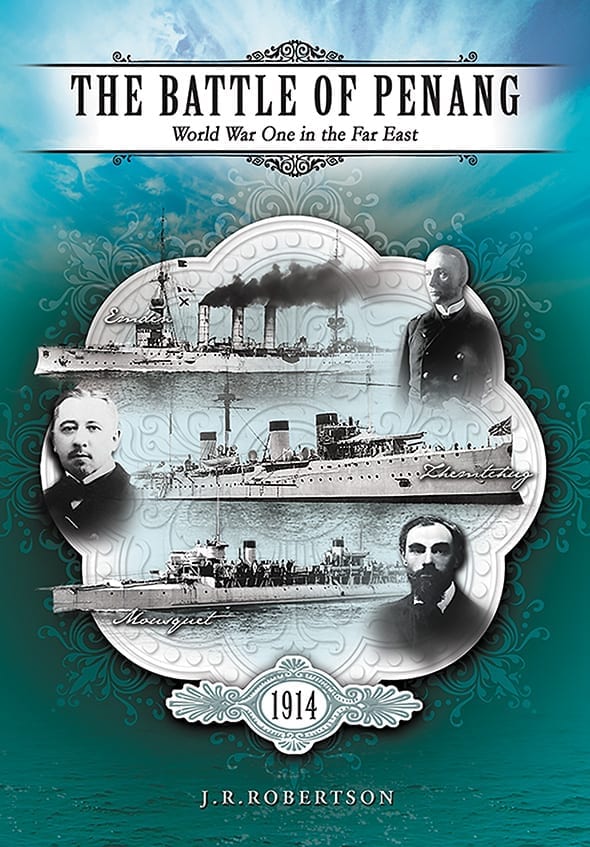 Dr John Robertson comes from a naval background; his father having been the gunnery officer in the famous British battle-cruiser HMS Hood. Dr Robertson joined the Royal Navy as a medical cadet and graduated from Edinburgh University in 1964, going on to serve a further six years as a doctor with the Royal Navy. Part of that time was spent as Staff Medical Officer to the Admiral of the British Western Fleet in his flagship HMS London.

Returning to civilian life, Dr Robertson specialised in Psychiatry working in various London teaching hospitals. He was made a Sub-Dean of the British Royal College of Psychiatrists in 1997.

Dr Robertson retired in 2002 and spends the winter months in Penang, where he is a member of the Penang Heritage Trust. He is married with two sons.

The Battle of Penang

World War One in the Far East

From civil-war torn China to the Singapore Mutiny, this story traces the dramatic events at the beginning of World War One, as the imperial forces of Britain, France, Russia and Japan expelled the German navy from their colonial possessions in the Far East and the Pacific. It follows the desperate rear-guard action fought by the German cruiser Emden, sinking a score of Allied merchant ships over several weeks around the Bay of Bengal and culminating in the Battle of Penang. There, Emden destroyed two allied warships, the Russian light cruiser Zhemtchug and the French destroyer Mousquet. In this they were aided by the lax security in Penang harbour. The British allowed the blame for the loss of these two ships to pass onto the Russians and the French. Two weeks later Emden met her own nemesis in the form of the Australian cruiser HMAS Sydney. Against this background, the rising power of the mighty Japanese navy and their seizure of Tsing Tao naval base from the Germans set the scene for the Sino-Japanese war two decades later.

This book throws new light on the debacle amongst the allied warships in Penang. For the first time, extensive information from the French and Russian archives has been included in this account.