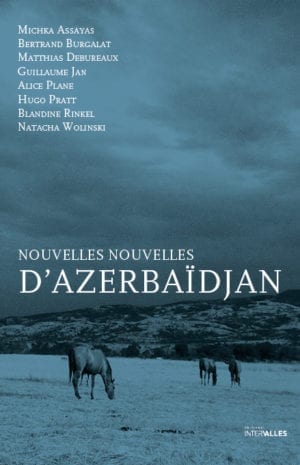 A hundred years ago, the country called Azerbaijan did not exist. On the map, it was but a curiously shaped space at the meeting point of Russia, Turkey and Iran, south-west of the Caspian Sea.
Since the journey of Alexandre Dumas in Caucasus and his enthralling descriptions of the Temple of Fire near Baku, apart from the remarkable exception of Olivier Rolin, very few French writers have talked about this far too unsung country.
In 2015, a dozen writers met the challenge and set out to discover this terra incognita and came back with short stories.
A democratic republic of Muslim tradition, like Turkey, Azerbaijan is a very western-oriented country at the vanguard of multiculturalism. Its capital city, Baku, is a mysterious medieval city, a maze of enigmatic alleys encircled by ramparts and surrounded by a forest of futuristic towers.
For many, Azerbaijan is still a faceless country. People often forget it was the very first non-religious democratic republic in the Turkish-Muslim area, giving women the right to vote twenty-five years before France. It boasts Russian, Armenian, Swedish, German, Polish and even French pioneers. There you can find dazzling palaces inspired by the magnificence of Venice, Paris and Monte-Carlo. One should know that since it was included in tsarist Russia in 1806 and absorbed by the Soviet Union in 1920 Azerbaijan has almost always known only a collectivist economy. And that Stalin spent several years in a hard-labour prison there when he was still a young Georgian gangster.
These short stories were produced by traveling writers with a fresh perspective: early 21st century French authors with a deep-seated individualism, a sceptical view of their collective destiny, puzzled by the unanimous patriotism of a young and fragile nation. They have tried to paint an honest and unique portrait of a place full of unsuspected treasures. The result is a radically fresh and explosive volume of unexpected and adventurous discovery.

“A singular collective gathering news about this unknown country… where Muslims, Christians and Jews live in perfect harmony two steps away from Iran and Chechnya.” Nicolas Ungemuth, Le Figaro Magazine

“Each of the authors has seen a different thread and, from there, weaves a new one. Some black and white photos enamel these delicate pages.” Latitude littéraire